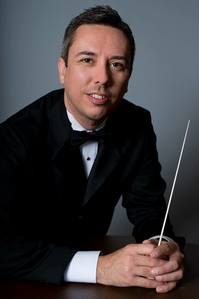 ​Dr. D. Jason Bishop enjoys a national and international reputation as a conductor, music educator, and choral scholar. Positions he has held include Artistic Director of the world-renowned, Grammy award-winning Texas Boys Choir; Associate Professor of Music, Director of Choral & Vocal Studies, and Chair of the Music Department at Drew University; Artistic Director of the Greater South Jersey Chorus; Director of Choral Activities at Penn State Erie; and Music Director of the Erie Philharmonic Chorus. Dr. Bishop is especially proud to have changed the choral landscape of northwestern Pennsylvania by founding its first and only community children’s chorus, the Young People’s Chorus of Erie, of which he served as Artistic & Executive Director. Crossing the city’s spectrum of racial, religious, and socioeconomic backgrounds, Dr. Bishop’s goal was to provide the region’s children with a world-class musical experience regardless of their financial means, building the organization’s mission on a commitment to diversity, artistic excellence, academic achievement, and personal discipline. During his tenure, he brought the Young People’s Chorus of Erie to the national stage in performances at Carnegie Hall and in competition at the World Choir Games (the “Choir Olympics”), for which they won two gold medals and one silver medal.

Described by the Erie Times News as “energetic, vital, and innovative,” Dr. Bishop has numerous performances to his credit in major venues including Carnegie Hall, Lincoln Center, Saint Patrick’s Cathedral, Sanders Theater at Harvard University, and the Chautauqua Institution. As an active guest conductor and clinician, he has conducted honor choirs, festivals, and workshops throughout the United States and around the world, as well as presented at multiple professional conferences on topics for which he is recognized in the profession, including building musical literacy in the choral rehearsal, serving diverse populations through music, and developing artistically cohesive approaches to programming. Dr. Bishop has received several awards and honors for his work, including “Outstanding Young Conductor of the Year” by the American Choral Directors Association of Pennsylvania, the Asset Champion Award from Healthy Youth Development of Erie County, and a Proclamation from the Erie City Council. He was selected by the American Choral Directors Association as one of seven conductors nationwide for a two-week conducting fellowship in South Korea, and he was named Honorary Chair of the Alpha Boys Choir of Shenzhen, China, where he was an invited guest conductor for the city’s public and international schools.

A native of Burns, Tennessee, Dr. Bishop earned the Doctor of Musical Arts degree in choral conducting from the University of Oklahoma, where he studied with Dennis Shrock. His dissertation, entitled Omnes Compleant: A Conductor’s Resource Guide to the Office of Compline, provides an overview of the historical evolution of Compline, along with complete source material for the traditional Compline liturgy with original Latin translations, chant transcriptions, a catalog of Compline-themed repertoire, and several polyphonic motets edited for study and performance. He received his Master of Music degree in choral conducting from Boston University, where he studied with Ann Howard Jones, and his Bachelor of Arts degree in Music and Classical Languages from Rhodes College in Memphis, where he studied conducting with the late Tony Lee Garner, graduated Phi Beta Kappa with distinction, was voted into the Rhodes College Hall of Fame, and received the Rhodes College Kinney Leadership Award for outstanding service to his community.
​
Dr. Bishop previously served on the faculty of Lesley University and on the administration of the Longy School of Music, both in Cambridge, MA; and as Director of Music at St. Stephen’s United Methodist Church in Norman, OK. He has performed as a countertenor soloist in chamber ensemble concerts and vocal recitals, and had the honor of singing for two seasons with the Santa Fe Desert Chorale, a professional vocal ensemble in Santa Fe, New Mexico. His numerous arrangements of Schubert and Schumann Lieder have been performed by men’s, women’s, and mixed choirs, with selections published by Colla Voce Music, and in Henry Leck’s Creating Artistry Series with Hal Leonard Corporation. He has served the American Choral Directors Association (ACDA) in a number of capacities, most recently as the National Repertoire & Resources Chair for Student Activities.
Click here to download bio